Indonesian economy is growing rapidly. Prices are also considerably higher than before, but the current situation is that other countries are still a lot more expensive. That’s why in Jakarta, you can get a stable technical massage at a low price in a clean shop. Introducing Jakarta’s massages and spas, as well as 5 recommended massages and spas in detail.

Jakarta, the capital of Indonesia, is a highly populated megacity. It is the largest city in Indonesia and the center of economy and politics. It is also famous that many Japanese companies are expanding into Jakarta. The number of foreigners living in Jakarta for work, such as expatriates and overseas business trips, is increasing, and the number of popular western restaurants is also increasing.

Indonesia’s economy is growing rapidly, but there are considerable disparities between cities. Among Indonesia, Jakarta is expensive and the minimum wage is twice that of the ancient city of Yogyakarta. It’s also a problem that there are so many differences within the same country. Jakarta is one of the most expensive in Indonesia.

Comparing the minimum wage between the USA and Jakarta, the US is more than several times higher. Prices in Jakarta are cheaper for local Indonesians to buy and use, and whiskey and other alcoholic beverages and western restaurants are more expensive than in the west.

Massage Shops and spas in Jakarta

The metropolis of Jakarta has a variety of massage and spa shops. There are a variety of shops, from popular shops that locals go to, to popular luxury spas targeting foreigners. There are many famous luxury hotels in Jakarta, and the hotels have a spa, which is a little cheaper than the spas of the same level in other expensive countries.

Of course, it is also nice to relax at the luxury spa in a luxurious atmosphere. But in the rapidly developing Jakarta, we especially recommend getting a satisfying level of massage at a low price. It’s a little more expensive than the locals go to, but it’s still a lot cheaper than in Europe or the US, and there are more and more clean shops where foreigners can relax.

Characteristics of an Indonesian Massage

Speaking of Ma’s popular massage shops in Jakarta, there are many reflexology shops, and this type of shop offers body massage as well as foot massage. Oil is often used on the neck and shoulders, and you need to take off your clothes if you want to receive it. Most massage and spa treatments start from an hour or more.

There are many beauty salons, spas, and massage shops in Jakarta. In Jakarta, which is one of the most expensive in Indonesia, the price of massage is also a little higher comparing to the rest of the country. A 1-hour aroma massage at a luxury hotel spa can cost you 1.000.000 IDR Indonesian rupiah, or about $70 USD.

The massage and spa shops introduced here are a little more expensive than the shops that locals go to, and they are clean and have services and technologies that satisfy foreigners. Around 120.000 Indonesian rupiah (about $8 USD) for 1 hour even at a slightly higher price.

Some of us worry about cleanliness, especially when it comes to massage. Jakarta, the capital of Indonesia and the city, is becoming more and more modern with new buildings. However, the cleanliness is inferior to that of Japan. It is a daily occurrence that garbage is falling on the road and flies are hungry for food stalls. For foreigners who like beauty, some people are concerned about the hygiene in Jakarta.

Many foreigners are visiting or living in Jakarta, and the number of shops for foreigners is increasing. Local people know that some foreigners are concerned with hygiene. So they’re improving their massage shops and spas to cater not only for the locals but also for the foreigners who are accustomed to luxurious conditions.

Is Massage Reservation Required in Jakarta?

Indonesian guidebooks may say that you don’t need a tip. In fact, Indonesia also has a habit of tipping. In a taxi, small amounts are rounded down and the driver may not give you change instead of a tip. Also, if you receive any service such as a hotel or a beauty salon, you may give it to the other party with gratitude.

Tipping is not required if you have a massage in Jakarta, but it is smarter to tip for good service. The market price of tips given to practitioners at massages and spas is 10,000 Indonesian rupiah (IDR). If you are very impressed, and you think that you will return, it is a good idea to give a nice tip.

Massage Shops and Spas in Jakarta

Please see our article about the top Massage Shops and Spas in Jakarta. Additionally, you may want to read about Yogyakarta Massage as well – the prices in Jogja are cheaper and the location is beautiful.

Other Massage Places in Asia

You’d be pleased to hear that Asia is the place for massage, especially oil and soapy massage. Japan and Thailand, of course, are the top countries for this type of massage. But Taiwan is also a great destination. Check-out 個工 which is the Spaland in various Taiwanese locations such as Taichung, Taipei, Kaohsiung, and Tainan.

Indonesia, a country that has everything. It has beautiful nature, interesting tourist attractions, fun nightlife, good restaurants and of course, good massage. Nowadays it is very easy to find and book Indonesia massage directly from your phone or laptop. Just look at the options below and signup to register in seconds – free of charge.

Whether in the capital city of Jakarta or other cities and towns, you’ll definitely find a consistent offer.

Jakarta is the largest city in Indonesia and one of the largest in Asia. This is a perfect place to have a perfect short holiday, especially if you’re into bars, dancing, nightlife, food and…massage. For a quick list of massage therapists in Jakarta don’t go farther than below.

Other cities in Indonesia

There is no shortage of masseurs and masseuse outside the capital. Some of the cities with most massage offers (and requests) are Bali, Bandung, Tangerang, Surabaya and Bogor.

Bali is a paradise not only for the locals or the people of Indonesia. It is paradise also for the millions of tourists and business people from all over the world. With more visitors to the Island of Gods, we notice an explosion in services such as massage.

Taman Ayusinta provides outcall massage in Denpasar and other areas in Bali. Click here to contact Taman Ayusinta and Book Massage in Bali. See below list of massage services and prices.

Now you can order massage directly to your hotel room in Jakarta. Vina Massage brings the service to your door, whether is a hotel, apartment or home.

How to order Hotel Massage Jakarta

The easiest and fastest way to order out-call services from Vina Massage is to text on Whatsapp. You can also call +62-838-1839-3068 and discuss details directly with the provider.
If you would prefer to order via text click the button below. 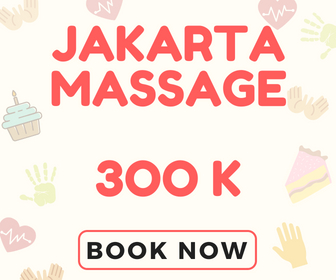 Vina Massage rates and packages are quite simple. In fact only one package, listed below:

Welcome to Yogyakarta, or Jogjakarta as an alternative name. This is the city where you want to be in Java, Indonesia. Beautiful ancient temples, either Buddhist or Hindu and so many more things to see. One could even go to the beach side and spend time in nature – some waterfalls and amazing forest views are located not far from Jogja. If you’re adventurous you could even climb an active volcano!

After all these activities your body might need a good massage. Give Kevin a call. He provides outcall massage Yogyakarta.

Jakarta is a huge city with many options when it comes to massage. At the same time, one might seem lost in this urban jungle. That’s why we need a good source that provides quality massage services at the market price. We, at Massage Prices, recommend Fantasy Massage as your trusted Outcall Massage Jakarta. You can add your reviews below.

How to order Outcall Massage in Jakarta, Indonesia

There are 2 treatment types included in the 90 minutes Vitality Package:

Fantasy Massage in Jakarta does outcall massage at your hotel or residence in the following areas of the city: Central Jakarta, South Jakarta, West Jakarta, East Jakarta, and also Kelapa Gading, and Sunter (South Jakarta).